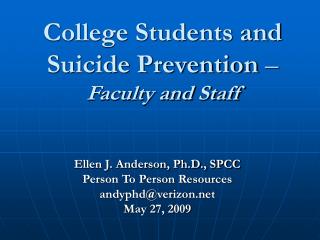 Army Suicide Awareness and Prevention - . every one matters! . prepared by the office of chief of chaplains &amp; the

Emergency Procedures Training For Faculty, Staff and Students - . this presentation will provide you with information,

CDI College Calgary South Campus Students, Staff and Faculty - On the october 31, 2013 our students dressed up in

Suicide Prevention - . suicidal ideation: thinking or talking about committing suicide (making a will, getting affairs in

Working Together: Faculty, Staff And Students With Disabilities - Access and excellence:. working together: faculty,

TXT4Life and Suicide Prevention - . september 17, 2013. need and motivation. 3 rd leading cause of death for youth and

Depression and Suicide Prevention - . coping with depression: what you can do for yourself. let someone know you are

Suicide Prevention - . colquitt county school system. “too often we underestimate the power of a touch, a smile, a kind