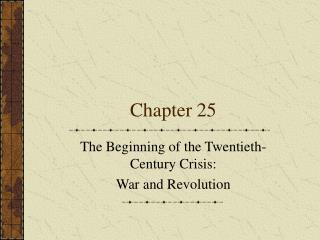 Chapter 25. The Beginning of the Twentieth-Century Crisis: War and Revolution. Timeline. Map 25.1: Europe in 1914. The Road to World War I. Nationalism and Internal Dissent Nationalism Liberals claimed that creation of national states would bring peace