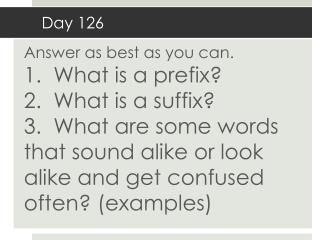 Day 126. Answer as best as you can. 1. What is a prefix? 2. What is a suffix? 3. What are some words that sound alike or look alike and get confused often ? (examples). CRT Review – Commonly-Confused Words. a ccept – to receive; to take; to agree to Psalm 126 - . when the lord brought back the captive ones of zion we were like those who dreamed. our mouths were filled

126 Announcements - Final exam is on create website (save a tree): project information:today in class halat qadir-iraq

Psalm 126 - . almost all of us from time to time encounter difficulties and trials. loss of a job loss of income loss of

Psalm 126 - . almost all of us from time to time encounter difficulties and trials . . . loss of a job loss of income

126 Announcements - . reflections and project assignment #1 will be returned today instructions for project outline due

MAT 126 Innovative Educator/MAT 126.COM - Mat 126 is an online course which provides you to get best

Psalm 126:6 - ‘he who goes out weeping, carrying seed to sow, will return with songs of joy, carrying sheaves with him