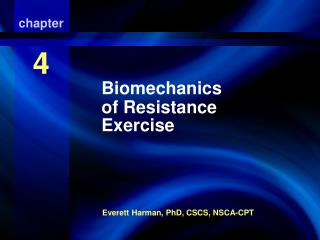 RESISTANCE EXERCISE - . definition :. resistance exercise is active exercise in which muscle contraction is resisted by

Introduction to the Biomechanics of Sport Exercise - 3 definitions of biomechanics.

Fundamentals of Biomechanics - . ib sehs- sl. phases of motion. preparatory - execution - follow through. why is it

Biomechanics Of Swimming - . kicking. the legs serve as stabilisers. they do this by moving away from the midline of the

Fundamentals of Biomechanics - . biomechanics. applying the concepts of physics and mechanics to the way the body moves

Biomechanics Of Sprinting - . understanding sprint performance. horizontal velocity throughout the race is constantly