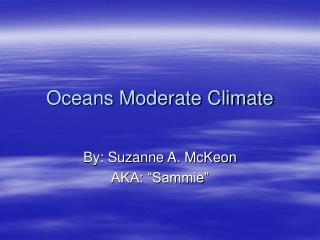 Oceans Moderate Climate. By: Suzanne A. McKeon AKA: “Sammie”. Heating the ocean. Earth is a complex and dynamic system with a surface that is more ocean than land. The ocean interacts continually with the atmosphere, by exchanging, storing, and transporting matter and energy. OCEANS MODERATE CLIMATE - . morgen kelm. what is climate?. climate is the average weather usually taken over a 30-year

Oceans and the Climate - . by chris santomassi and jake coughlin. el niño-southern oscillation . el niño is a period of

Climate, oceans and paleo-environments - . topics for this week the role of human activities in a complex climate system

OCEANS - . facts about the great blue waters of our earth by vicky sivillo. the earth has 5 oceans……. the atlantic,

Oceans - . why is the ocean salty?. 1. the ocean is salty because of dissolved chemicals eroded from the earth's crust

 Oceans  - . by coltin. . oceans are cool because there have lot of things like sharks , sting rays , eels ,

Oceans - . pacific. pacific is the biggest ocean in the world. it takes one third of earth´s surface and half of surface

Oceans - . by scott lovely and cody nelson. temperature. it is 60 degrees by day. winter is around 36 degrees. it is 30

Oceans - . chapter 11.1. the ocean floor. if you could travel along the floor of the ocean, you would see: the

Oceans - . 9/24/2009. pacific ocean. largest ocean covers more space than all of the continents put together majority of