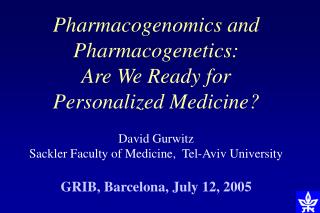 Medicine of the Future The Transformation from Reactive to Proactive P4 Medicine Predictive, Personalized, Preventive

Faculty of Medicine - . faculty of medicine. research and education in medicine and health care. 13 departments, 3

The „hope vs. hype dilemma“ of the „Personalized Medicine“ claim - The feasibility of personalized medicine

Pharmacogenetics and respiratory disease - . genetic biomarkers for treatment of disease and targeting of treatments. dr