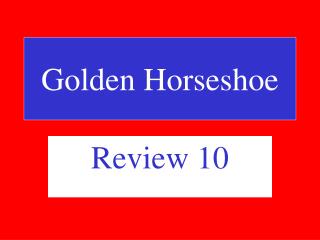 Golden Horseshoe. Review 10. The Gauley and the New Rivers are known worldwide for what activity ?. White water rafting. What two European countries laid claim to the lands in western Virginia in the 1700’s. England and France. Who was the first governor of West Virginia?. Arthur I. Boreman.

The Algebra of Gold - . by frank j. antoniazzi jr. why study about gold?. gold is valuable. many people buy gold jewelry.

Golden Horseshoe Review 14 - . the elected official who is keeper of the great seal of west virginia is:. the secretary

King Midas and the Golden Touch - . be careful what you wish for…. before we read…. we are going to spend some time

Characteristics of Entrepreneurs - . economics &amp; business sample lesson. prepare for learning. being in the sixth

All About Golden Retrievers - Livingthepetlife.com provides the best possible care for your pets with safety &