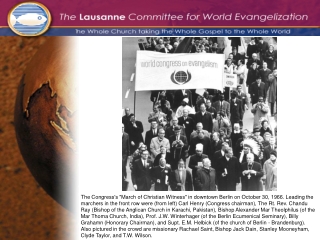 15 th World Congress of the International Economic Association - . sovereign debt crises through the prism of primary

Comments from Around the World - . mediation participants from around the world give feedback to the don adr program.

15 th World Congress of the International Economic Association - . sovereign debt crises through the prism of primary

Evangelization - . article 38 in the textbook pages 141-146. marks of the church &amp; evangelization. one as the

Primary Evangelization in Mongolia - . god our father, by the preaching of francis xavier you brought many nations to

THE MEANS OF EVANGELIZATION AND OF THE FORMATION OF EVANGELIZERS - . a youth response. guide: dr paul vadakumpadan sdb.

&quot;Social Networks: Portals of Truth and Faith; New Spaces for Evangelization&quot; - . some reflections on

Lausanne Movement III - . events and development after 1974. lausanne international congresses and conferences since