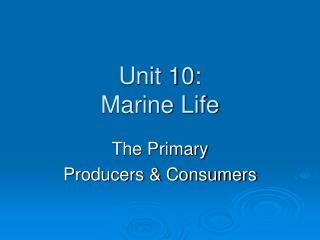 Unit 10: Marine Life. The Primary Producers & Consumers. Phytoplankton , for the most part, are single celled plant-like organisms that drift near the ocean surface They are NOT plants!!!! Account for between 90 - 98% of ocean carbohydrate production. Marine Life Biome - . by lukas struppe. basic facts to know before you read this. click to enter the de ep s ea. the

Marine Life and Ecology - . 2. from phytoplanktons to invertebates. virtually all primary productivity on land comes from

Marine Life and Ecology - Marine life and ecology. from basics to the extremophiles. heterotrophy. autotrophy.

CHAPTER 12 Marine Life and the Marine Environment - . overview. more than 250,000 identified marine species most live in