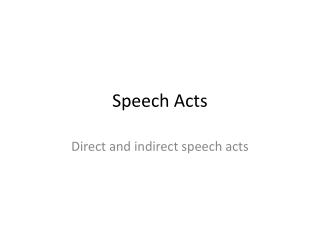 Speech Acts. Direct and indirect speech acts. Speech Acts. Speech Events may also include Speech Acts . J.L Austin observed that ‘many utterances do not communicate information, but are equivalent to actions, e.g. I apologise…’ I promise….’ ‘I will….’ (at a wedding’ Speech Acts - . questions to run on. what in the world do i do now?. speech acts. assertions assessments

Speech Acts Definition of speech acts - . a speech act is a functional unit in communication (cohen, a.d.) it’s an

SPEECH ACTS - . by don l. f. nilsen. conditions on performatives. subject must be 1 st person. verb must be active. verb

SPEECH ACTS - . by don l. f. nilsen. conditions on performatives. subject must be 1 st person. verb must be active.

Speech Acts II - . week 7 language in context. a: i don’t want to bother you, but could you please have a look at my

Speech Acts and Speech Events - . austin (1962) and searle (1969)-it is possible to classify utterances into very small

Speech Acts: What is a Speech Act?

Speech Acts &amp; Language Functions - . pragmatics not only language structure is rule governed – language use is,