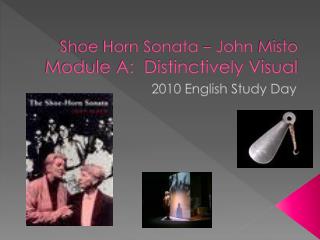 Shoe Horn Sonata – John Misto Module A: Distinctively Visual. 2010 English Study Day. Examination points to remember. You must show the examiner that you understand that this text is a drama. DO NOT call it a book – refer to it as a ‘text’ or ‘drama’. Forces - . forces. a force is a push or a pull exerted on an object forces can cause objects to speed up, slow down, or

The Life of a Shoe - . "on a piece of paper, start by brainstorming some of the places where you typically find your

My Report and Diagram is on my toy Shoe-Shoe SpongeBob - . by maddie carton the members of my group: taylor, and grace.

MODULE A: Experience Through Language Elective: Distinctively Visual - . this module requires students to explore the

s tretchers - . the shoe that fits anyone. * are you tired of your shoes shrinking? *well i’ve got the shoe for you!

John Misto - Is a prolific and multi-award winning writer who has been writing for the theatre, film and television for

Distinctively Visual - . making meaning through visual language. what is a visual?. define the term visual. what are some