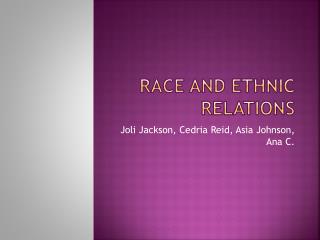 Race and Ethnic relations. Joli Jackson, Cedria Reid, Asia Johnson, Ana C. What is race?. Race is a category of people who share inherited physical characteristics and whom others see as being a distinct group. What is ethnicity? . Race and Ethnic Inequality - . social inequality. on the agenda for today. what is the racial ethnic make-up of the

Race, Racism , Race Relations and Sport - . the end of racism. racism is not the main problem facing blacks! destructive

Race and Ethnic Group Stratification: - . beyond “we” and “they”. soc 100. dr. santos. what characterizes race