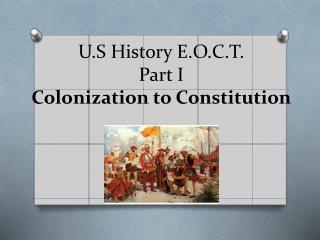 U.S History E.O.C.T . Part I Colonization to Constitution. Domain I Standards 1 - 5. Settlement of North America in the 17 th century. The economic and social development of British North America. The causes of the American Revolution. U.S. Constitution. Colonial Period Standard 1.

Unit 3: Constitution Test - . mr. young 1 st and 6 th period. this section of the constitution states why it was written,