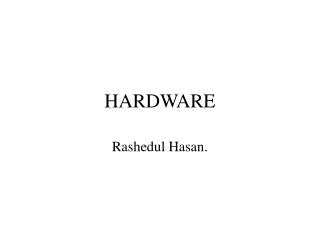 Computer Hardware and Operating Systems - . learn to adapt to change and be self sufficient. objectives. remove the

Computer Hardware - . in this lecture, we will study: the hardware components of an information system: cpu (central

Hardware - . hardware industry in india. hardware are the major components of several industrial sectors such as

HARDWARE - . chapter 16. i’m only a machine!. what is a computer?. a computer is an information processing machine i t

HARDWARE &amp; SOFTWARE - . hardware and software. the computer is made up of 2 essential parts hardware: the