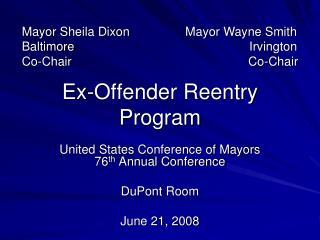 Ex-Offender Application Preparation - . some thoughts on application preparation. one of the most common questions i

MRP (Missouri reentry program) - . corrections side. core belief: offender reentry is a philosophy which requires a

Reentry - . a new opportunity to improve family well-being the 76th annual meeting of the united states conference of