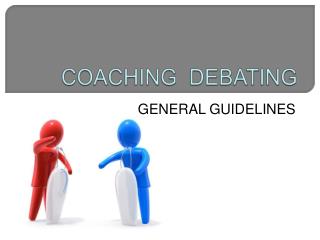 Debating…. - Debating…. how? who? what happens?. key terms. debate: a game in which two opposing teams make speeches

Debating - G. garcía - soza. debating. debate is a method of interactive and representational argument. a debate is a

Debating! - . 7 volunteers for a little “debate” 8 minutes to discuss the following statement: 17 year old girls are

Debating Vegetarianism - . learning target. i can present a claim and findings in a logical manner with relevant evidence

Debating Topicality - . keeping order. what is topicality?. a gateway issue says that the affirmative plan is not an

Philosophical Debating - . 101. what is a debate. a formal method of presenting an argument(s) in support of or against a

Debating Toolbox - . what is wrong with this argument?. watch this short clip and discuss

Debating Confederation - . today- referendum- the people give their opinion directly by voting for or against an issue