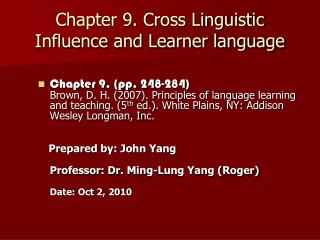 Chapter Nine - . the linguistic approach: language and cognitive science. linguistics. the study of language. a variety

From Sounds to Language - . lecture 2 spoken language processing prof. andrew rosenberg. linguistic sounds. how does a

SLA and Linguistics - Sla and linguistics. the field of sla can be considered interdisciplinary in that it has been