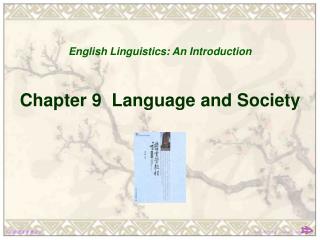 Chapter 8 Language and society - . sociolinguistics ---- a sub-field of linguist ic s that studies the relation between

Ch. 9 Language in Society - . an introduction to language (9e, 2009) by victoria fromkin, robert rodman and nina

Chapter 9: Language - . some questions of interest. ? ? ? ?. what is language?. organized way to combine words to

Thinking and Language Chapter 9 - . cognition. cognition. thinking , or cognition, refers to a process that involves

Language and Society - Vlada vyacheslavovna baranova vbaranova@hse.ru. language and society. what is the role of

Language and society - . 1. the scope of sociolinguistics 1.1 indications of relatedness between language and

Thinking and Language Chapter 9, Lecture 3 - . “to expand language is to expand the ability to think.” - david myers.