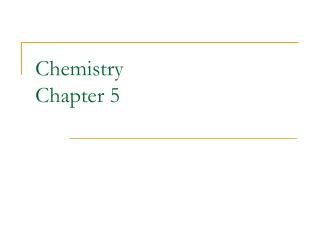 CHAPTER 1 CHEMISTRY, GREEN CHEMISTRY, AND ENVIRONMENTAL CHEMISTRY - . from green chemistry and the ten commandments of

Stoichiometry Chemistry I: Chapter 12 Chemistry I HD: Chapter 9 - . save paper and ink!!! when you print out the notes on

Chapter 1 Introduction to Chemistry - . what is chemistry scientific method chemistry strategies. what is a chemist?. a

Chapter 16 Organic Chemistry - In this chapter, we will explore basic organic concepts including nomenclature, structure,

Chapter 1 Chemistry: What is Chemistry - . (a whole lot of fun!). objectives. describe chemistry classify and describe

Chapter 1 – Intro to Chemistry - . chemistry and matter. chemistry (defn) – study of matter and changes it undergoes

AP Chemistry Chapter 2 - . section 2.1 timeline for chemistry prior to 1000 bc-natural ores-ornaments and weapons,

AP Chemistry Chapter 5 Models of the Atom - . beginning of the atomic model. democritus was the early (around 400bc)