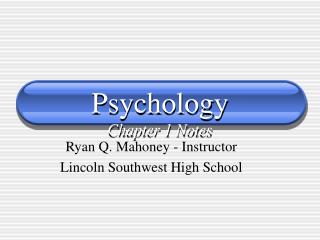 Chemistry Chapter 4 notes - . early models of the atom atom the smallest particle of an element that retains its identity

ATC Psychology Chapter 9 “Consciousness” - . consciousness is the awareness of both external stimuli and one’s own

Psychology 312-1 - . physio logical basis of behavior jp-rosenfeld@northwestern.edu. this is a psychology course….