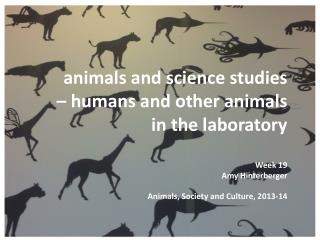 animals and science studies – humans and other animals in the laboratory Week 19 Amy Hinterberger Animals, Society and Culture, 2013-14. outline. 1) Animals as scientific objects– what does ‘humanisation’ mean in this context? Donald M. Broom Centre for Animal Welfare and Anthrozoology - Animals have always had welfare but what humans know of it

SCARY ANIMALS - . by chris. chilean rose. i have had a chilean rose tarantula i fed him dead mice they are not poisonous

Animals and Persons - . ethical status for animals. kantian and utilitarian ethics traditionally extended to all people,

Animal Ethics - . 2 april 2014. animals in world religions. homework. research and write up: what does the bible teach

Animals - . what am i? of some 1.5 million species of organisms known to science over two-thirds are animals humans have

Sorting Animals Lesson 55 - . the world is full of animals. to keep track of animals scientist sort animals into groups.

animals and science studies – humans and other animals in the laboratory Week 19 - Amy hinterberger animals, society