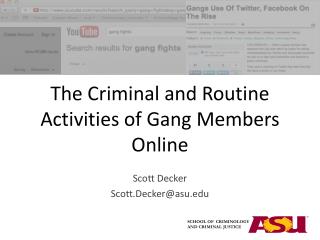 GANG ACTIVITIES/ GANGSTERISM - . what is a gang? (define). a gang refers to a sub-culture or a small group which breaks

Routine Calibration Activities - The routine phase will start at the end of the commissioning phase. the routine

The Gang of Four - . bruche p.t.c. when trainers were men, and commandants were afraid. bruche. jonimac’s hair looks

The Rise and Fall of the Gang of Four - . jiang qing. zhou enlai. vs. l/o – to identify the key features of the gang of

Gang of Four The beginnings… - . the original “patterns” idea was from architecture – there are repeatable

The Case of The Kelly Gang - . using fingerprints to solve a crime. the pattern of lines on the ends of your fingers