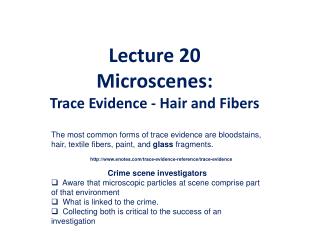 CHAPTER 11 PROPERTIES OF THE HAIR AND SCALP 2012 Edition - . q. what are the two add: chief purposes of hair?. protection

The Trace Minerals - . chapter 13. the trace minerals – an overview. food sources depend on soil and water composition

DART and Trace Evidence (a bag of tricks for using DART) - . robert b. cody jeol usa, inc. . outline. use of dopants with

Chapter 11 Trace Elements: Metals, Paints and Soil - . objectives: describe the usefulness of trace elements for the

DO NOW: - . quietly…….. take a poll of how many of you have the following traits: - brown hair -blonde hair -red

LECTURE 9 : EMPRICIAL EVIDENCE : CAPM AND APT - . (asset pricing and portfolio theory). contents. how can the capm be

Lecture 10 - . definition of the hair general facts about hair the structure of the hair hair growth cycle hair loss.

Disorders of hair - . less hair excessive hair. the hair can be divided into three parts (1) the bulb a swelling at the

Chp. 10 Hair Analysis - . please do now. how many hairs does the average person have on his/her head? all brown hair red