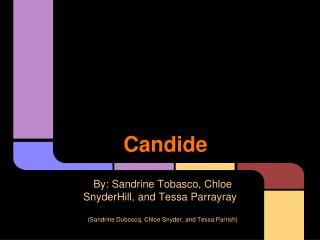 Candide - . by voltaire. chapter 1. how candide was brought up in a fine castle, and how he was expelled from it candide

Candide - . question three. question. choose a novel or play or long poem in which a scene or character awakens

Candide - . it is dangerous to be right when the government is wrong. french author, humanist, rationalist, &amp;

Candide | !#PDF #$BOOK - "candide is the story of a gentle man who, though pummeled and slapped in every direction

Voltaire &amp; Candide - . voltaire was born francois marie arouet on november 21, 1694 in paris. he received his

Voltaire and Candide - . if this is the best of all possible worlds, then i’d hate to see what the worst is like…. a.

Spread of Enlightenment Ideas - . objectives. identify the roles of censorship and salons in the spread of new ideas.