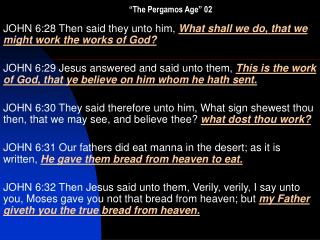 “The Pergamos Age” 02. JOHN 6:28 Then said they unto him, What shall we do, that we might work the works of God? JOHN 6:29 Jesus answered and said unto them, This is the work of God, that ye believe on him whom he hath sent. Church in Pergamos - . attribute of jesus these things says he who has the sharp two-edged sword positive you hold fast

The Letter to Philadelphia - The history of philadelphia. it was established in the 150s bc, the youngest of all the

The Letter to the church at Pergamos - . revelation 2:12-17. the letter to pergamos. address: to the angel of the church