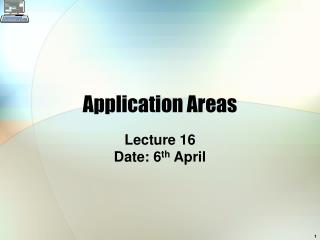 THE CRITICAL AREAS ORDINANCE - . department of development and environmental services. overview of the cao package harry

Speeding Vehicles in Residential Areas - . a curriculum developed by rana sampson companion training curriculum to the

So You Want to Use the Baldrige Criteria? - . prepared for tncpe customers by dan jordan 2009/2010 criteria. using the

F5 for Application Delivery Networking A Blueprint for Successful Application Use Environment - . presented by: timo

Chapter 11 Areas of Plane Figures - . understand what is meant by the area of a polygon. know and use the formulas for

Load Testing Using NeoLoad - . why load test an application. does the application respond quickly enough for the intended

CSUMentor Tutorial 2009-10 - . how to complete the csumentor undergraduate online application. about the tutorial.