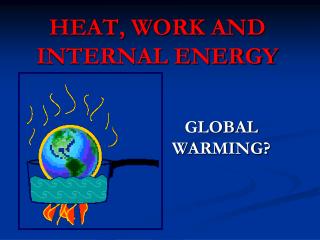 HEAT, WORK AND INTERNAL ENERGY. GLOBAL WARMING?. THERMODYNAMICS : the science of energy, specifically heat and work, and how the transfer of energy effects the properties of materials. A “ system ” is the “collection of objects on which attention is being focused” Heat, temperature and internal energy - . when an object is heated, heat energy flows into it and its temperature

12.6  Heat and Internal Energy - . heat. heat is energy that flows from a higher-temperature object to a

Heat and Heat Energy - . energy in matter. rub your hands together. what happened? you just used energy to make heat!

Heat and Work - . sign convention. heat and work exchange due to a chemical reaction. enthalpy change . change in

Work and heat - . when an object is heated and its volume is allowed to expand, then work is done by the object and the

Heat and Energy - . heat and temperature. heat is a type of energy that will flow from a warm area to a colder one. for