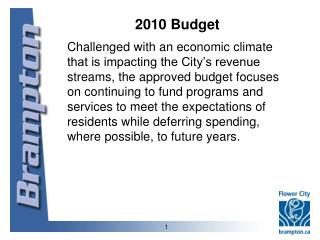 2010 Budget. Challenged with an economic climate that is impacting the City’s revenue streams, the approved budget focuses on continuing to fund programs and services to meet the expectations of residents while deferring spending, where possible, to future years. . Summary. Budget 2010 -2011 - . the board of education wished to hold costs down for the community!. problem:. no state approved

Pelham Budget 2010 - . background of the operating budget for 2010 article 4 in the town warrant. state reduction. the