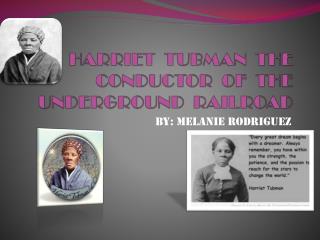 HARRIET TUBMAN THE CONDUCTOR OF THE UNDERGROUND RAILROAD HARRIET TUBMAN THE CONDUCTOR OF THE UNDERGROUND RAILROAD . BY: MELANIE RODRIGUEZ. Table of Contents. Introduction.

HARRIET TUBMAN THE CONDUCTOR OF THE UNDERGROUND RAILROAD

Riding the subway in North Korea - Scenes from the underground in

Salt mine therapy - Children are treated for respiratory illnesses, 1378 feet underground between layers of potassium and

Early Logging in the San Juan Valley - . the railroad the camps the logging the union. by “ wild”. click to advance

UNDERGROUND STORAGE OF NATURAL GAS - AN OVER VIEW - . overview. a vailability of energy at a steady rate and at a

UNDERGROUND ECONOMY - . joint task force on the underground economy and employee misclassification. what is the

from Harriet Tubman: Conductor on the Underground Railroad by Ann Petry - . feature menu. introducing the selection