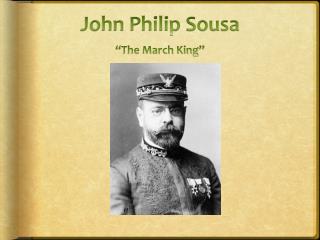 John Philip Sousa “The March King”. Early Life. Born November in 1854 in Washington, D.C. He was exposed to music at a young age by his father Antonio de Sousa, who was a trombone player in the U.S. Marine Band. BUST OF PHILIP THE ARAB - . philip – his life . philip rose to power as the praetorian prefect in gordian iii’s army

Alexander the Great - . between 404 b.c. and 362 b.c. greek states competed. persia was still playing a key role and

King John - . “ bad”. king john was born in 1166 he was called john lackland because he lost most of his lands in

Philip II of Macedon - . macedonians were considered tough people, but uncivilized (no artists, philosophers) he became

Matthew -- The Gospel of the King - Made ~ anagkaz ō – compel , constrain. john 6 ~ 15 therefore when jesus perceived

Does King John deserve the title ‘Worst Briton’? - . objectives. in this activity you will: describe some of king

King John and the Magna Carta - . could the rich control the king?. rich-but not greedy fit and strong inspiring