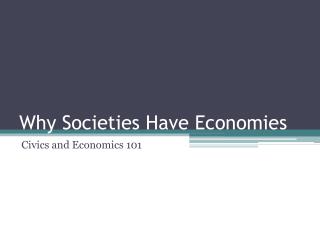 Why Societies Have Economies. Civics and Economics 101. What are the basic wants or needs which every society must provide to be successful? . Food & Water Clothing Shelter. The Environment. WHY SOCIETIES HAVE ECONOMIES - . wants the basics: food, clothing, shelter we usually want more. why societies have

WHY DO INDUSTRIALIZED SOCIETIES HAVE DISABILITY PROGRAMS? - . history of disability systems. exist in infra-human primate

One Nation – Two Economies, Two Societies - . latin american independence and the role of the united states. 1810-1823

Why Do Economies Grow? - . lesson 3. colonial economy mystery. north america offered no known gold or silver for the

Why Do Economies Grow? - . why do economies grow?. economists believe that there are two basic mechanisms that increase

Why Do Economies Grow? - . why do economies grow?. there are two basic mechanisms which increase gdp per capita over the

Why Do Economies Grow - 2 of 42. why do economies grow?. economists believe that there are two basic mechanisms that

Why We Have Seasons : - . seasons are caused by the 23.5 0 tilt of earth combined with earth’s revolution around the

Why Do We Have - . why do we have the weather ?. just think about it! why is there wind? why does it blow from one

Meiosis - Why have sex? - . causes an increase in genetic variation within a population. independent assortment of

Why Have Nutritional Bars? - Nutritional bars are an instant source of energy and easy to carry anywhere. they speed up

WHY HAVE A FREEBOARD? - . there are many good reasons to enforce additional elevation (margin of safety). why have a