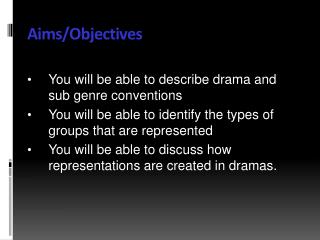 Reflections of ADS2 2011 - . “there has never been a better time to teach computer science” patrick prosser 2011.

Lesson Two - . marrakech. objectives of teaching. to comprehend the whole text to lean and master the vocabulary and

WHAT WERE THE AIMS OF EACH PIECE OF LEGISLATION OR CONSTITUTIONAL AMENDMENT - . federal trade act set up federal trade

Learning Objectives - . what’s the data say? how do we clearly communicate learning objectives to students? presented