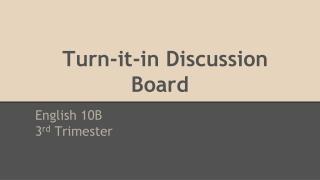 Turn-it-in Discussion Board. English 10B 3 rd Trimester. Why are we doing this?. -To engage central themes from readings -To craft responses to dense questions -To practice MLA in-text citations -To learn from one another through discussion Turn-it-in Discussion Board - . english 10b 3 rd trimester. why are we doing this?. -to engage central themes from

Turn it in or Turn it Off? - . trevor j. price head of technology enhanced learning tprice@glam.ac.uk. esyin chew and

Turn It In - .com. how-to. login/register. www.turnitin.com. registration. username: 56573 password: hcrose12. in the

Discussion Board in TaskStream - . technology and instructional planning how do you plan to use technology for

Turn-It-In Tutorial - . student user guide. the turnitin website is www.turnitin.com you should see the below page. click

Discussion Board Use - . what to do’s. what to

Integer Discussion Board - . + , -. let’s talk addition…. what are some strategies to solve integer addition problems

CGI Board Evaluation Discussion - . 30 may 2013. discussion. board evaluation any questions asked that you felt were not

Ch2 (#6) - Discussion Board - . the &quot;name-your-own-price&quot; model is considered a reverse auction.