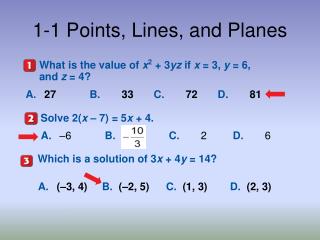 Vocabulary found in… - . lines or paths along which someone or something goes, lies, or points are called. lines or

Chapter 3 - . parallel and perpendicular lines. 3.1 properties of parallel lines. transversal – a line that

Hydraulic Lines and Fittings - . lecture 8. purpose of lines. all hydraulic lines are designed to transmit fluid from one

1.1 – Identify Points, Lines and Planes - . geometry ms. rinaldi. undefined terms. the words below have no formal