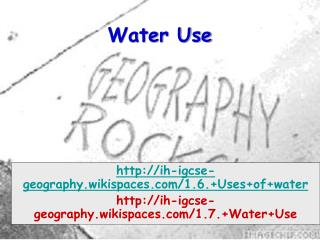 WATER USE - Sherborne environmental study. water use. in our school grounds we have 3 water butts to collect rain water.

Water Use - . environmental science. global water use. most of the water worldwide is used to irrigate crops the

Water Use - . what is the hydrologic cycle?. the water cycle precipitation evaporation transpiration. what is ground

Water use - . branston has grown and evolved over the years... . we’ve focused on lean operation and efficient

Water Use Model - . note: be sure you have already selected your time and station before choosing this product. click on

WATER USE EFFICIENCY - Adoption of improved technology for efficient use of water , nutrients and pp chemical

Water Use Program - . how it has changed why it is important!. eric k. klotz, p.e. utah water resources frank quintana,

US Water Use - . confined aquifer and potentiometric surface (height water will rise due to hydrostatic pressure).

How We Use Water - . group: that one group in the corner. how dam’s help us use water. dam’s provide us with power