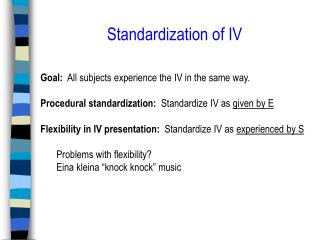 THE WAY INTO THE SANCTUARY PART IV - . christ’s heavenly ministry in the holy place by calvin mariano

IV. The “Whole-School Approach” as our Goal : - Infuse peace perspectives into the life of the whole school.

The WISC-IV - . ht820: introduction to psycho-educational assessment. purpose of the wisc-iv. the wechsler intelligence

The President IV - . 2/21/2012. clearly stated learning objectives. upon completion of this course, students will be

The President IV - . 10/3/2011. clearly communicated learning objectives in written form. upon completion of this course,

Do All Students Learn the Same Way? - . learning styles. professor dancelot. what would help the students in this class

IV. Materials in the atmosphere - . i. vocabulary. a. atmosphere- a protective layer of air that surrounds the earth and

IV. Farming in the West - . a. homesteading. the homestead act (1862) offered 160 acres to anyone who resided on the land

IV. UNIT IV - . a. production and the. demand for resources. 1. marginal productivity theory. of resource demand. a.

IV. The Process of Evolution - . a. two types of evolution. macroevolution – any change of a species over time into

CQU Portal Task Experience IV - . putting it all together. final year focus. consolidation of skills which support and

Feelin the Same Way - . shoot the moon. don’t know why. come away with me. cold cold heart. feelin the same way.

The Generalized IV Estimator - Var(u). var(y). var(x). a. b. c. var(z). the theory and practice of instrumental variable

PART IV: The Disease - . sars: what do we know so far?. viral infection – a new mutation of coronavirus affects all

“All students can learn and succeed, but not all on the same day in the same way.” - - william g. spady. sens