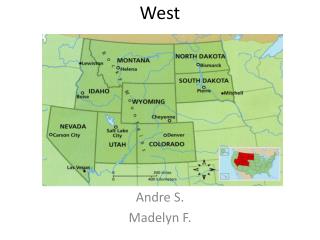 West. Andre S. Madelyn F. . Introduction . There are 8 states in the West: Montana, Idaho, Wyoming, Utah, Nevada, Colorado, North Dakota, and South Dakota. Thousands of settlers headed west in the 1800s to find a better life. They were looking for open land to start a farm and build a house. West - . by: stephanie, gaby d, gabby p, diego, philip. agriculture. in the west there are trees . there are also pointy

west - Unit 4 making the news. north. west. east. south. news. from where do we get the news?. reporter / journalist.

West - Models of the solar system, gravitation and the motion of the planets – a.k.a dead white guys week!. planets

Ireland West - What i saw there. after the 80 countries i visited, my favorite holiday places are

*KANYE WEST* - . helping to combat the severe dropout problem in high schools across the united states by developing

West Africa - . landforms sahara to the north. sahel to the north below the sahara. coastal plains along the atlantic

WEST VA - . wonderful to be at this 33 rd summer institute on aging. thank you jacki and sherry for your work and your