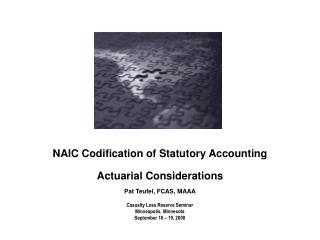 Actuarial Science - . an introduction. what is an actuary?. “an actuary is a person who analyzes risks and plans for

Involvement - . gbc 2012. overview. improve involvement of student body and drive interaction among students pass on the

Diversity in The Actuarial Profession - . by stafford l. thompson, jr. fsa. what is

CODIFICATION OF SPORT - . continued…. learning objectives. know the role of oxbridge in the codification of sport

Involvement In Crime - . definitions . many crimes are not the work of a single person legal terms for the different

Pfafstetter Basin Codification - . what is it? a topological system for codification of basins. based on topology of the

Actuarial Science - . an introduction. what is an actuary?. â€œan actuary is a person who analyzes risks and plans