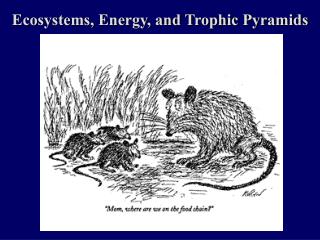 Trophic Levels, Energy transfer and Pyramids - . trophic levels – is the position an organism occupies in a food

The Structure of Ecosystems- Trophic Pyramids and Food Webs - . autotrophs and producers. get energy from sunlight (

Trophic Levels &amp; Ecological Pyramids - . trophic levels. each step in a food chain or food web is called a

TROPHIC LEVELS IN ECOSYSTEMS - . capturing and releasing energy. everything that you do requires energy! most of the

Trophic Structure of Ecosystems - . where does all life on earth get energy from? sbi4u rhsa. energy flows to and from

Energy Pyramids - . energy transfer. energy is transferred from the sun to producers. the producers use most of the

Ecosystems and Energy - . 3. overview of chapter 3. what is ecology? the energy of life laws of thermodynamics

Ecosystems and Energy - . chapter 3. ecology. study of the interactions of organisms and their living and non-living

Energy and Ecosystems - . ecology. habitat : place where an organism lives population: group of the same species of

Ecosystems and Energy - . unit 2. what is ecology?. the study of the relationships between organisms and their

Ecosystems and Energy - . 0. 42. overview: cool ecosystem. an ecosystem consists of all the organisms living in a

Energy Flow and Trophic Structure - Energy capture. heterotrophs: obtain energy from organic sources or from other