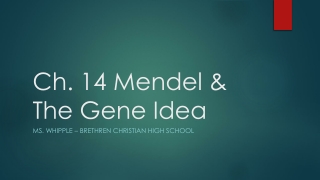 Ch. 14 Mendel & The Gene Idea. Ms. Whipple – Brethren Christian High School. 1. What was the “blending” theory of heredity that was popular during the 1800s?. One possible explanation for heredity was a “blending” hypothesis.