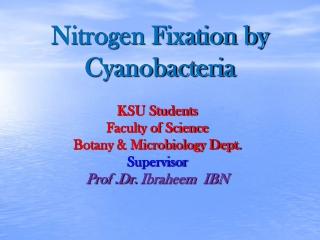 NITROGEN FIXATION - Nitrogen fixation. the growth of all organisms depend on the availability of nitrogen (e.g. amino

Figure 4.4 - The nitrogen cycle. figure 4.4. while n 2 is the ultimate source and sink of biospheric nitrogen, several

The Nitrogen Cycle - . revision. learning objectives. to understand that the nitrogen cycle is composed of the following

Bacteria Kingdom Notes - . these will be used for pages 4-7 in the kingdom journal. common names. archaebacteria archaea

Plant Physiology - . assimilation and fixation of nitrogen. nitrogen in the environment. many biochemical compounds

Nitrogen Cycle - . the nitrogen cycle is the movement of nitrogen through different environmental segments. nitrogen.