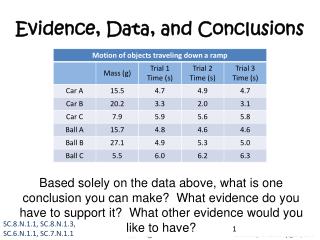 Beyond evidence based practice - . richard smith editor, bmj. what i want to talk about. reflections on whether evidence

Workshop Conclusions and Recommendations - . towards better evidence on migration and development in eastern europe and

Evidence - . arguments consist of conclusions. developed by reasons supported by evidence whose significance is

Evidence - . evidence. evidence- something that tends to establish or disprove a fact. testimonial- statement made under

Making INFERENCES - Conclusions drawn by the reader based on evidence and reason. making inferences. conclusions

Date : 12/3 /13 Aim: What does the evidence tell us about who Shakespeare was? - Weekly learning target : i can cite

Is this data easy to draw conclusions from? - . scientific data become meaningful only when they are organized and

1.) Which conclusion is best supported by the data in this table? - A. health care was more expensive in argentina than