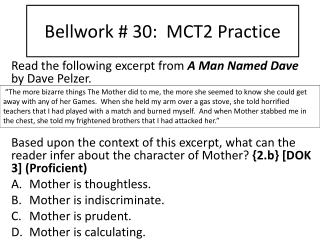 BELLWORK - . today’s bellwork will focus on reviewing the wwii totalitarian governments (hopefully you did not forget

Unit One Bellwork - . updated every friday. about bellwork … . you are responsible for making up missed work. . turn in

Bellwork - . what are the five characteristics of a mineral?. bellwork. discuss a scientific observation you have made

Bellwork - . bellwork solution. add and subtract polynomials. section 9.1. the concept. in chapter 3 we talked about

Bellwork – Review of last week - . write the answers on your bellwork . 1. the inside of the earth is made up of ____

Bellwork - . take out your bellwork question sheet, write down each problem, and then solve it be ready for 2-minute

Bellwork – Review of last week - . write the answers on your bellwork . 1. the inside of the earth is made up of ____

Bellwork #16: MCT2 Practice - . which of the following statements from the lost boy by dave pelzer accurately portrays

Bellwork (3/5) - . using the synopsis on p. 1010, complete the cluster diagram, in which you will note the opinion each

BELLWORK - . define the following words: totalitarian fascism communism what three things did germany have to do under

Bellwork for 8/27/12 - . learning goal students will be able to use their bellwork journal correctly. vocabulary antic

Bellwork - Outcomes may 2 and 3 i will be able to: 1. determine whether statements about acids and bases are true or

Bell Work - . 1. if a membrane allows movement of only certain materials, it is called ___. somewhat permeable

Bell work - . how would you end the crucible ? if you had to write the final act of the drama, how would it end? write a