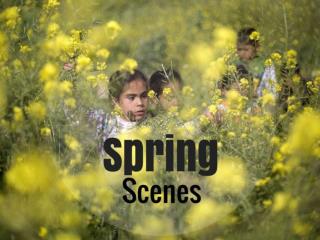 Spring has arrived in the Northern Hemisphere. The vernal equinox is anticipated by many looking forward to warmer temperatures and a welcoming rebirth. In some areas of the world, the signs are more apparent. This year, the first day of spring held the distinction of coinciding with a solar eclipse. MEMORABLE SCENES - . from around the

Map Scenes - . what mapscenes is all about... the mapscenes system will allow you to measure and confirm an entire crime

opening scenes - Scenes which are

Creating Scenes - . a scene in flash contains one or more layers that show related objects, in the stage, that act and

River scenes - . photos and maps from source to mouth along selected uk rivers. when viewing a picture, click on the

Behind the Scenes - . design brochure to send home permission slips building administration talk to all staff, we need

Scenes from Glastonbury - The festivities begin at worthy