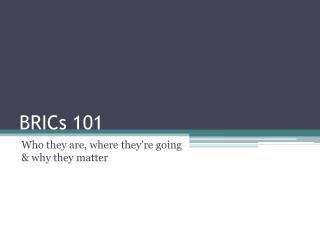 BRICs 101. Who they are, where they’re going & why they matter. Introduction. BRICs are news-makers The fourth BRIC(S) summit was held in March 2012, in New Delhi From the summit came BRICS bank BRICS and Media - . media systems in flux: the challenge of the brics countries project hosted at the university of

Where are the BRICS?

India in the BRICS - . jayati ghosh presentation for workshop on “strategies of development in india and other asian

BRICS for an Innovative South - . k j joseph. overview. the context two dimensions of ssc reemergence of ssc and their

BRICS – Potential, Opportunities and Challenges – - . the world is changing. what has happened in the past 20 years?.