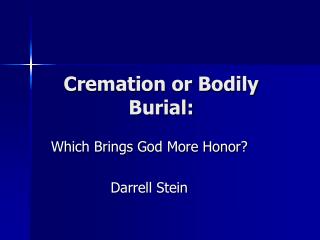 Cremation or Bodily Burial:. Which Brings God More Honor? Darrell Stein. Origins of Cremation. Derived from the Latin cremare (“to burn”), cremation is the process of disposing (destroying) a dead body in the flames of fire. CHAPTER 3 - . death and burial through the middle ages and renaissance. christian influence during the early middle ages.

Cremation at Parker Mortuary - . what are the facts?. why do we want a crematory. cremation has grown from .5% of our

Anxiety Disorders - . anxiety: negative mood state characterized by bodily symptoms of tension and apprehension about the

Determining Overall Mental and Behavioural Impairment - . a clinical and scientific perspective. there are two questions

EXERCISE PHYSIOLOGY - . prof k. sivapalan department of physiology, faculty of medicine, university of jaffna. what is

Bloodborne Pathogens - . microorganisms such as viruses or bacteria that are carried in blood and can cause disease in

The Importance of Healthy Hydration - . slide kit. the importance of water. water is an essential component of all bodily