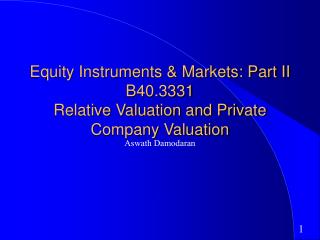 Equity Instruments & Markets: Part II B40.3331 Relative Valuation and Private Company Valuation. Aswath Damodaran. The Essence of relative valuation?. In relative valuation, the value of an asset is compared to the values assessed by the market for similar or comparable assets.

Financial Modeling - . valuation, decision making and risk. every major decision a company makes is in one way or another

Valuation - . aswath damodaran http://www.damodaran.com for the valuations in this presentation, go to seminars/