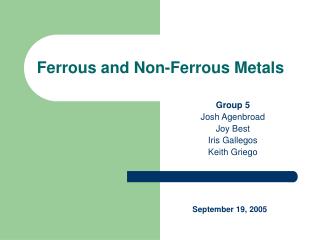 Ferrous and Non - Ferrous Metals - . lesson 3. m etal is an element, compound or alloy that is a good conductor of both

CON 251 Non Ferrous Metals - Introduction - . nonferrous metals and their alloys do not contain iron as a principle