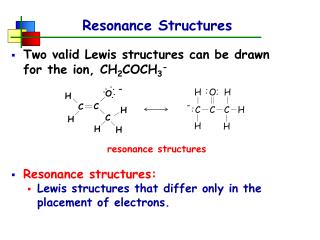 Resonance Structures - . book way to do lewis dot structures. 1. get the sum of all valence electrons from all atoms.

Resonance and Line Structures - . [hco 2 ] -. any common octet breaking atoms? how many electrons are present? what is

Resonance - . october 31, 2012. looking ahead. i’m almost done with the grading of the second production exercise…

Resonance - . there are certain cases in which a single lewis structure cannot correctly describe a molecule. example :

Resonance - . a molecule or polyatomic ion for which 2 or more dot formulas with the same arrangement of atoms can be

Resonance - . everything vibrates. ex: drop a pencil, blow in a soda bottle, pluck a guitar string– all these things

Resonance - . resonance is defined as “the reinforcement or prolongation of sound by reflection from a surface or by

Resonance: - When you can draw more than one classic valence bond structure for a compound that differ only in the

Delocalized Electrons: Resonance - . when writing lewis structures for species like the nitrate ion, we draw resonance