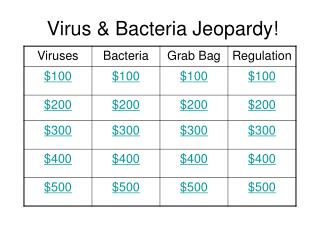 Virus & Bacteria Jeopardy!. Viruses $100. Describe the basic structure of a virus. Infectous particles consisting of a nucleic acid (DNA or RNA)enclosed in protein coat , and in some cases a membranous envelope. Return. Viruses $200. Viruses &amp; Bacteria - . chapter 17 biology 11 presentation put together by mandie lynn walls. what are viruses. a

Beyond Viruses…… - . can create an “infection” that can lead to the death of the “infected organism?

Microorganisms: Viruses and Bacteria Instructions:  Choose one bacteria or one virus to research.

Virus - . a tiny, nonliving particle that invades and then reproduces inside a living cell. host cell. an organism that

Bacteria &amp; Viruses - . ms. napolitano &amp; mrs. haas cp biology. is it bacteria? is it a virus?. is it

What we know about Bacteria… - . prokaryotic: no nucleus &amp; no membrane bound organelles unicellular can be good

Bacteria and Viruses - . chapter 10. characteristics of bacteria and archaea . bacteria are too small to be seen without

VIRUSES - A virus is a tiny nonliving particle that enters and then reproduces inside a living cell. they can multiply

Viruses and Bacteria - . chapter two. viruses. characteristics of a virus tiny non-living particle that enters and then

What do you know about Viruses? - 1. what are the 5 most common viral infections? 2. name 2 similarities between a virus

Summary of virus introduction - . two critical experiments that resulted in the discovery of virus infectious filterable

Bacteria - . what is meaning of micro-organnisms ?. micro-organisms is bacteria is the smallest.it have to part. what are